2Principal and Head of the Department, Dept. of Pharmacology, School of Pharmacy, Anurag Group of Institutions,Ghatkesar, Hyderabad, Telangana, India

Results: Beta-Caryophyllene significantly decreased the arthritis which was evident with arthritis index, paw volume as well as the maintenance of biochemical parameters. The histopathology and radiology also revealed the control in inflammation with Beta-Caryophyllene.

Conclusion: The present study is suggestive that Beta-Caryophyllene has prominent anti-arthritic activity which may be attributed to its antiinflammatory activity.

Rheumatoid arthritis (RA) is a chronic, relapsing inflammatory and autoimmune multisystem illness that affects the joints, characterized by inflammation of the synovial membrane, pain and restricted joint movement [1]. Rheumatoid arthritis is systemic inflammatory disease in which the destruction of articular cartilage leads to bone deformity and loss of joint function and ultimately severe pain. It is the most common inflammatory arthritis affecting approximately 1-2% of the general population worldwide i.e. 20 million people worldwide. Incidence increases with age, with women being affected three times more than men (Arthritis Research Campaign). The risk of incidence appears to be greatest for women between 40 and 50 years of age, and for men somewhat later, which makes the rheumatoid arthritis to be an age-related immune disorder [2,3]. Rheumatoid arthritis is a chronic disease, and although rarely, a spontaneous remission may occur, the natural course is almost invariably one of persistent symptoms, waxing and waning in intensity, and a progressive deterioration of joint structures leading to deformations and disability. While there are many treatments like non-steroidal anti-inflammatory drugs (NSAIDs) and disease modifying antirheumatoid arthritic drugs (DMARDs) available for Rheumatoid arthritis, up to 30% of patients fail to respond to treatment [3]. However, besides their high cost, prolonged use of many of these drugs is associated with severe adverse reactions such as gastric and duodenal ulcers, complications in the small intestine and colon can occur, which cause colitis, bleeding, perforation, stricture, and chronic problems such as iron deficiency anemia and protein loss and toxicity. A report also states that, NSAIDs treatment enhances joint destruction in arthritis and inhibits glycosaminoglycan synthesis. Recently, there has been an increasing interest in natural food for scavenging the free radicals because of their wide acceptance [4].

Some constituents of plants, particularly terpenoids, have been reported to be useful in the management of inflammatory diseases [5]. Among the terpenoids, β-Caryophyllene (trans- 4,11,11-trimethyl-8-methylenebicyclo[7,2,0] undec-4-ene) is a sesquiterpene present in very large amounts in natural products e.g. clove oil, cinnamon leaves, and copaiba balsam, all of which have been used as natural remedies and also as fragrances (Figure.1). This compound is also known to be anti-microbial [6], anti-oxidant [6,7], and anti-carcinogenic [8] and to possess skin penetration- enhancing properties [9]. Essential oils that have Beta-Caryophyllene as a major component (30.6%) showed marked anti-inflammatory activity against carrageenanand prostaglandin E1-induced edema in rats as well as anti-arthritic activity [9,10].

The aim of the present study, therefore, was to evaluate the ameliorative effect of oral administration of Beta-Caryophyllene (Figure.1) in rats on experimental Arthritis induced by Complete Freund’s adjuvant (CFA). 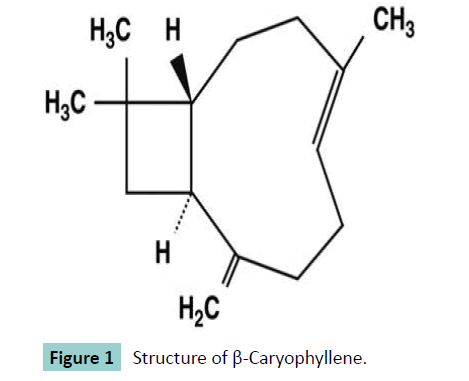 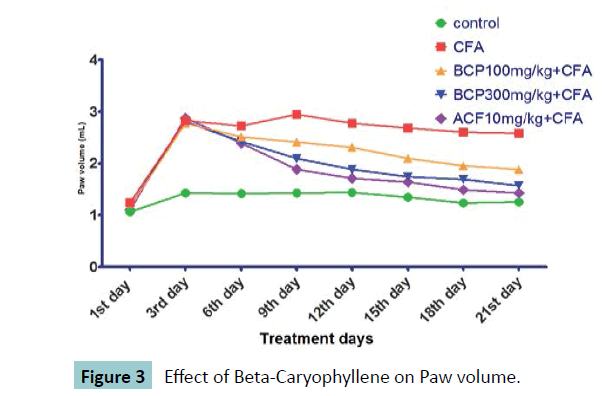 Figure 5: Effect of Beta-Caryophyllene on TBARS and Serum Nitrite. Male Wistar rats of body weight 200–300 g were used for the study. The animals were maintained under standard environmental conditions and were fed with standard pellet diet and water ad libitum. All the experimental procedures were carried out in accordance with Committee for the Purpose of Control and Supervision of Experiments on Animal (CPCSEA) guidelines. All the experimental procedures were approved by IAEC. (I/IAEC/ LCP/011/2014/WR-30?)

Induction of arthritis and treatment protocol

The animals were divided into six groups of six animals each as follows:

Arthritic control group was given a single injection of 0.1mL Complete Freund’s adjuvant in to subplantar region of right hind paw on day 1 under light ether anesthesia [12]. The dosing of all the groups started from day 1-12 once daily orally and the study was continued till day 21. Dose selection was based on previously published studies showing that oral doses of Beta-Caryophyllene used ranged from 1mg/kg to 600 mg/kg, Anti-arthritic activity of Beta-Caryophyllene was evaluated on paw volume, animal body weight and arthritic score on day 0, 3, 6, 9, 12, 15, 18 and day 21. The animals were sacrificed on day 22 to study the joint histology.

The left hind paw volumes of all animals were measured just before Freund’s complete adjuvant injection on day 0 and thereafter at different time intervals till day 22 using a plethysmometer (VJ instruments) [14,15]. The change in paw volume was measured as the difference between the final and initial paw volumes.

The animals were sacrificed on day 22 by cervical dislocation. Ankle joints were separated from the hind paw, weighed and immersed in 10% buffered formalin for 24 h followed by decalcification in 5% formic acid, processed for paraffin embedding sectioned at 5_ thickness. The sections were stained with haematoxylin and eosin [20] and evaluated under light microscope for the presence of hyperplasia of synovium, pannus formation and destruction of joint space.

The data was analyzed by one way ANOVA followed by turkey test. The values of P < 0.05 were considered statistically significant [21].

In the present study, rats were selected to induce arthritis because rats develop a chronic swelling in multiple joints with influence on inflammatory cells, erosion of joint cartilage and bone destruction. Within 24 h of administering the Freund’s complete adjuvant cardinal signs of inflammation, hyperalgesia, swelling, and hyperaemia were evident in all animals. Since measurement of vital signs of inflammation in both hind limbs is more practical and accurate than a visual grading system [22] and also allows the effects of drugtreated groups to be expressed quantitatively, we measured the hypersensitivity, and paw edema of each rat joint.

All the groups of animals administered with Freund’s complete adjuvant started showing signs of clinical inflammation in one or more hind paws, which was a biphasic response (Table 1-7). The first manifestation of disease was erythema of one or more ankle joints followed by involvement of the metatarsal and interphalangeal joints. There was an initial development in the manifestations of

Table 5: Effect of Beta-Caryophyllene on TBARS and Serum Nitrite.

Effect of Beta-Caryophyllene on change in paw volume

Effect of Beta-Caryophyllene on Anti-Oxidant Enzymes

As a result of inflammation induced by adjuvant, the levels of SGPT, SGOT and ALP were increased in all arthritis rats as compared to control rats. After Beta-Caryophyllene treatment, the levels of these enzymes were significantly decreased in Beta-Caryophyllene 100mg/kg and 300mg/kg rats as compared to control rats. Aceclofenac (10mg/kg) treatment prevented biochemical changes to a greater extent than the Beta- Caryophyllene doses. The SGOT, SGPT, ALP and bilirubin levels of all the groups were evaluated and compared with each other. • Mild pannus formation in which proliferation of fibrous tissue noticed from the cartilage – Red arrow (Figure 8).

In adjuvant-induced arthritis model, rats developed a chronic swelling in multiple joints with influence of inflammatory cells, erosion of joint cartilage and bone destruction and remodeling which have close similarities to human rheumatoid disease. These inflammatory changes ultimately result in the complete destruction of joint integrity and functions in the affected animal. Also, the Complete Freund’s adjuvant administered rats showed soft tissue swelling around the ankle joints during the development of arthritis, which was considered as edema of the particular tissues. Β-Caryophyllene is a natural bicyclic sesquiterpene and phytocannabinoid receptor agonist which is isolated from clove leaf oil, clove stem oil, cinnamon leaf oil, and pine oil fractions [23].

Paw swelling is an index of measuring the anti-arthritic activity of Beta-Caryophyllene at the dose level 100 & 300mg/kg/p.o. Beta- Caryophyllene administered groups showed marked reduction in paw volume when compared with the arthritic control group (Group II) found that there was significant weight loss, the day following the injection of the adjuvant, but thereafter continued to show normal weight gain in rats. The result of the present study also indicates that there is a close relationship between the extent of inflammation, loss of body weight and arthritic index. [24].

The radical derivatives of oxygen (O2) are the most important free radicals in the biological systems. The activated O2 intermediates together with secondarily formed radicals like hydroxyl radicals are able to destroy membrane lipids, proteins, DNA, and cartilage. Neutrophils, macrophages and dendritic cells generate ROS in large amounts in response to activation in CFA induced rats [25] Moreover, ROS produced by macrophages, lymphocytes and endothelial cells contribute to the destruction of cartilage. Increased lipid peroxidation and decreased enzymatic and nonenzymatic antioxidants are found in Rheumatoid arthritis patients, the MDA levels in Rheumatoid arthritis patients are significantly higher than normal, but the activities of GSH, catalase and SOD are lower. These findings suggest that oxidant stress plays a very important role in the pathogenesis of Rheumatoid arthritis disease. Our study also showed that levels of three oxidation products, MDA and NO, in Complete Freund’s adjuvant rats were higher than those in the control, and meanwhile, the activities of antioxidants were lower.

Assessment of the levels of SGOT, SGPT, ALP and bilirubin provides an excellent and simple tool to measure the anti-arthritic activity of the target drug. The activities of these enzymes were significantly increased in arthritic rats. These are good indicators of liver and spleen impairment, which are also considered to be features of adjuvant arthritis [26]. The result of the present study also indicates that there is a close relationship between control and Beta-Caryophyllene treated groups.

Histopathology provides a noticeable morphological distinctiveness as a practical and unambiguous pathognomonic sign of Rheumatoid arthritis. The histopathological analysis identified the ability of the bones to re-form upon treatment with Beta-Caryophyllene. Bone structures re-calcified upon treatment with the Beta-Caryophyllene dose dependently. The Beta-Caryophyllene exhibited such therapeutic potential from the study results and is therefore consistent with earlier findings that the ability of a drug to suppress inflammation, synovitis and protect a joint is desired in rheumatoid arthritis therapy.

Radiographic changes in Rheumatoid arthritis conditions are useful diagnostic measures which indicate the severity of the disease. Soft tissue swelling is the earlier radiographic sign, whereas prominent radiographic changes like bony erosions and narrowing of joint spaces can be observed only in the developed stages (final stages) of arthritis [27]. The radiographic features of the rat joints in adjuvant induced arthritic model are shown in Figure 2. In adjuvant induced arthritic rat (group II), soft tissue swelling along with narrowing of the joint spaces were observed which implies the bony destruction in arthritic condition. The standard drug Aceclofenac (10mg/kg) treated groups have prevented this bony destruction and also there is no swelling of the joint. Similar to histopathological studies, Beta-Caryophyllene treatment for 21 days have shown significant prevention against bony destruction by showing less soft tissue swelling and narrowing of joint spaces when compared with Complete Freund’s adjuvant control group.